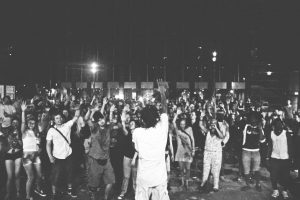 another righteous MC in the Lion’s Den… coming with wicked styles and real Lion power… in German, French and English…
hitting the stage all over Germany and recording some wicked material in the studios up and down the country…

* Who is konTa – the musical character? Tell the people something about your musical journey.

Well, konTa the musical character is on a journey receiving his power from various kinds of music since early childhood. Now he is mostly spreading his message on instrumentals that come out of the Reggae, Dub, Hip Hop, Jungle or Dubstep movement.

It is all about sharing, receiving and giving, energy, knowledge, emotions, experience – a kind of a vibe. Music is part of humanity and therefore part of every human being, it is about upliftment, so konTa is a musical misson to uplift the people.
I love all these styles of music, they give me the possibility to express myself – lyricalwise in a flow, able to carry a certain energy.

* Why did you pick up on writing & singing?

Well I really kind of had a particular reason to start, to let’s say grab the mic. It was the development that I was witnessing around me. Especially in Hip Hop, in the so-called ‘underground scene’ as well as on the ‘upper’ mainstream level, particularly in Germany, where I grew up and so that’s what I was closest to.
In my neighborhood, my surrounding, my city, in other places, on VIVA, MTV, later on the net… When I first got into contact with Hip Hop, I felt that there was something in the music, something very powerful. It was bringing a new vibe, rappers where pointing their fingers on important issues that many have always tried to keep covered up. Rappers where asking questions, spreading news on wild energetic instrumentals. But with the commercialization a big part of the whole thing turned dumb. Knaan had a very nice line about it in his track SOMALIA where he says:
“A lot of mainstream rappers are yappin about yappin a lot of underground guyz are rappin about rappin.”
And that is basically what the main image, the face of Hip Hop was turned into.
So I was kind of upset about all these guys that where misusing Hip Hop from how I saw it. So I started to also blame myself. I was thinking: “How can you blame all those guys, when you don’t even know how to kick a single line?”
So I startet writing…