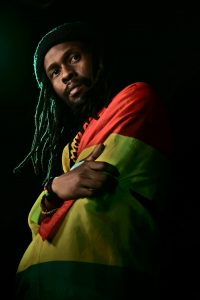 Kali green aka ‘SirKaliGarten the Lyrikal Assassin’ originally known as Thabiso Mokheseng is an astonishing and inspiring MC, producer, sound engineer, beat maker and song writer hailing from the southern hemisphere of Africa in the mountain kingdom of Lesotho. Currently based in Berlin, Germany, he has been blessed to get to work and develop friendship with some of the brightest producers and artists in the Dub / Bass music industry as part of the Lion’s Den. Since then it has been a long path of great collaborative work. Always moving forward in unity.

the first releases are out on Lion’s Den, 4Weed, King Dubbist, One-Drop Music, Marée Bass and much more material is in the pipeline…
nuff a dem stylez! di voice comin’ in hot, comin’ in sweet! haffi check it out, indeed…!