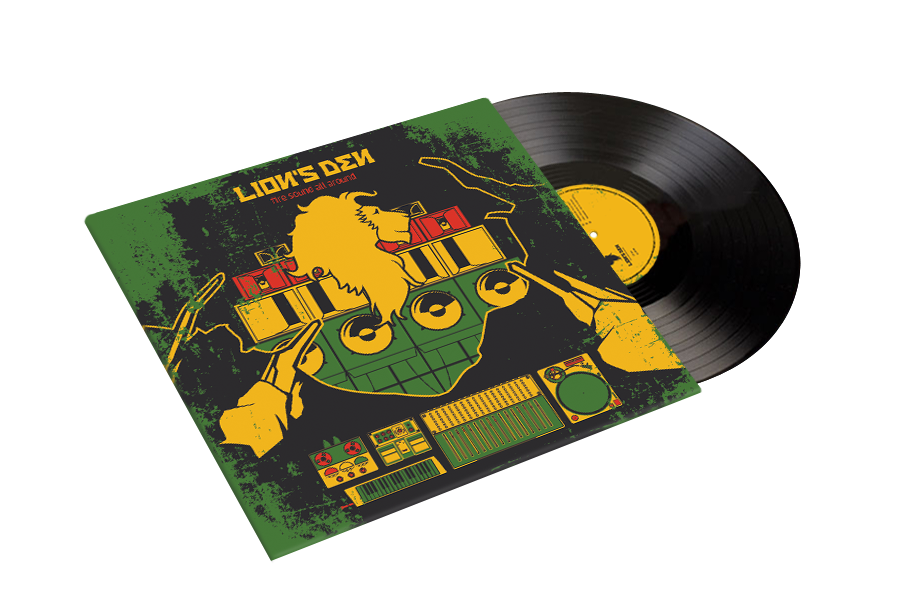 grab it in the SHOP section…

For the first release Lion’s Den has teamed up with the heavyweight steppaz producer Panda Dub outta Lyon, France, to deliver finest in conscious dub for all music lovers. A driving riddim with three different vocal and a special heavy steppaz dub cut, mixed by Roommate outta San Francisco, USA, and finally transferred to 1/2inch Tape for extra analogue warmth, mastered with care and pressed on high quality limited and hand-numbered 180g vinyl by Star Delta / Delta Disc, UK – of course also digikally available.
The first track coming “Hot A Di Press” is a soundbwoy anthem style combination with the legendary Jamaica-born Daddy Freddy outta Nottingham, UK, on the microphone – a dedication to the soundsystem culture, a musical murderation. The second tune features the “Original Rasta MC” Brother Culture outta Brixton, UK, with some oldstyle “Dance Teng” lyrics from 1985 and the third vocal is from Lesotho-born Kali Green outta Berlin, Germany, chanting with full power and dedication – calling out for some “Hard Working” and conscious living instead of hypocritical dealings. Last but not least, Panda Dub himself cut a heavy steppaz dub version, ready to nice up every soundsystem session from the north to the south and from the east to the west.
Message music for the people…

Lion’s Den will set the fire ablaze with this debut, but from there on it will keep on burning and many further projects are already lined up – so watch out.

For bookings, mixtapes, studio sessions, voicings, new tunes and dubplates or any other inquiries contact:
LION’S DEN /// contact [at] lionsdensound.de

Panda Dub is a rising French dubmaker and live performer. Inspired at first by the french electro-dub school (High Tone, Brain Damage, Improvisators Dub…) on the one side and the heavy steppaz oriented UK-dub scene (Iration Steppas, Alpha & Omega…) on the other side, his creations have thereafter evolved to a personal style : Panda’s touch wisely mixes together ethno samples, fresh electronic melodies, enchanting textures and punchy stepper rhythms sustained by powerful basslines. Delivering strictly uplifting organic Dub sound somewhere between roots, (UK) steppaz and (french) electro dub making the listener jump and skank while sending the mind on a journey. Many of his albums are digitally available for free through the french dub platform OriginalDubGathering. Other labels with his work include: Dubatriation and Fresh Poulp.

The world’s fastest rapper according to the -Guinness Book of World Records, Jamaican-born Daddy Freddy was also one of the first artists to fuse ragga and dancehall with hip-hop, helping establish a style that would become highly influential during the ’90s. Freddy (*1965) grew up in the Trenchtown area and, taught by Ranking Joe, started on the microphone for his uncle’s sound system, eventually moving on to join Lieutenant Stitchie and, most importantly, Sugar Minott. His gigs with Minott’s sound system helped make his name in Jamaica and, following an overseas UK tour, in 1985, he made his first recording for Clement “Coxsone” Dodd’s Studio One label. From there on he recorded many great tunes and scored a remarkable six Top Ten hits in Jamaica during 1986. In 1987, Freddy returned to the U.K. and embarked on a musical journey with people like Asher D, Top Cat, Tenor Fly and Prento Youth and worked for the legendary Coxsone Sound and the record label Congo Natty. Artists such as Dr. Dre, Cypress Hill and David Morales requested collaborations and others like The Prodigy, Salt ‘n’ Pepa and KRS-One sampled his unique voice. In 1988, Freddy set a new World Record topping 500 syllables per minute. The rest is history. His recording list reads endlessly by now and he moves somewhere between the UK and JA, recording for many different artists in a variety of genres – Dancehall, Hip Hop, Jungle, Dubstep and beyond. Especially his recent collaborations with Bass Music producers like The Bug, Congo Natty, Mungo’s Hi-Fi or Part2Style seem to give the “legend” a new audience.

Brother Culture is one of the original Rasta MCs from Brixton, London. He started to mc in 1982 as part of the Jah Revelation Muzik Soundsystem . By the 80s Brother Culture was touring Jamaica , USA , Canada and Trinidad (the list reads much longer today: Europe, the U.K., Hong Kong, Philippines, India, Brazil, Japan, Mexico and many more). After a long stay in the USA , Brother Culture returned to London in the 90s where he started to mc at London’s famous “Dub Club”. He linked up with producers such as Nick Manasseh, Fire Lion Studio and selectors such as Cecil Rueben. Since the 90s Brother Culture has built a strong reputation on the MC circuit. He has worked and recorded with artists such as Mungo’s Hi-Fi, Roommate, Adrian Sherwood, Dubmatix, Kinyama Sound, Kanka, Brain Damage, Manasseh, Zion Train, the Prodigy, Twilight Circus, Reggae Roast, J*Star, Ras Kush, Subsonar and many many more .
Always bringing you a righteous message and heavy lyrics – Brother Culture – number One !!

watch out fi di wicked lion Kali Green on di microphone and di beatmachine – he is part of di Lion’s Den family… nuff a dem stylez! di voice comin’ in hot, comin’ in sweet! haffi check it out, indeed…!
right now hitting di stage all over and recording some wicked material inna di Lion’s Den… the first release is already out on King Dubbist and some further material can already be found in the web… he is also featured on the first Lion’s Den EP…