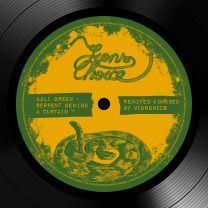 Kali Green - Serpent Behind A Curtain [LIONSCHOICED01] remixed & dubbed by Vibronics 1 // Kali Green - Serpent Behind A Curtain [Vibronics Vox Mix] 2 // Watch Behind The Curtain [Vibronics Vox DUB Mix] 3 // Watch What Dem Dub Part I [Vibronics DUB Mix] 4 // Watch How Dem Ruff Part III [Vibronics DUB Mix] 5 // Watch What Dem Do Version [Vibronics RIDDIM Mix] LION'S DEN /// www.lionsdensound.de /// remix by S. Gibbs aka Steve Vibronics @ Vibronics Studio /// vocals recorded by J. John aka Ras Lion @ Lion's Den Studio /// horns recorded by A. Hornbach aka Aldubb @ Planet Earth Studios /// lyrics & voice by T. Mokheseng aka Kali Green /// horns by C. Jolowicz (tenor sax) & M. Pé (trumpet) /// artwork by Martin Engelbogen /// mastered by Star Delta Mastering /// All rights reserved. © + ℗ 2018 Lion's Den Here comes something from the Lion’s Den ‘archives’. It was 2013 at a recording session in the Lion's Den studio, when Kali Green voiced "Serpent Behind A Curtain" - some reality lyrics about the bad dealings surrounding us - a warning to better 'Watch What Dem Do'. A little later the project was taken to Aldubb's Planet Earth Studio to add some sweet horn melodies with Mathieu (trumpet) and Claudio (sax), two great players of instruments from Berlin, Germany. The project was then sent to Leicester, UK, for some special remix treatment from the dub veteran Vibronics. Here are four tuff dub cuts and an instrumental version out of his studio to be played on a heavyweight Sound System... (This one digital format only. For free download or donation.) ===== [about the artists] ===== Vibronics [Leicester / UK] http://www.vibronics.co.uk/ Vibronics, the future sound of dub, have been vibrating the world with bass since 1995. Their music is at the forefront of the UK dub scene, proven by over 40 releases on their own legendary SCOOPS label as well as a host of albums, singles and remixes for a myriad of other labels such as Universal Egg, Jarring Effects, Jah Tubbys, Partial Records, Cubiculo Records and King Shiloh Tuff Dub. In the studio they have worked with Zion Train, Iration Steppas, Macka B, Ranking Joe, Brain Damage, High Tone, Big Youth and an almost endless list of dub & reggae luminaries. Wether dub-mixing live on stage, rocking the clubs or uplifting the festivals, Vibronics continue to perform tirelessly across Europe as well as in Asia, Central America and the Caribbean. Kali Green [Maseru/Berlin / LS/GER] http://lionsdensound.de/?page_id=32 Kali green aka ‘SirKaliGarten the Lyrikal Assassin’ originally known as Thabiso Mokheseng is an astonishing and inspiring MC, producer, sound engineer, beat maker and song writer hailing from the southern hemisphere of Africa in the mountain kingdom of Lesotho. Currently based in Berlin, Germany, he has been blessed to get to work and develop friendship with some of the brightest producers and artists in the Dub / Bass music industry as part of the Lion’s Den. Since then it has been a long path of great collaborative work. Always moving forward in unity. the first releases are out on Lion’s Den, 4Weed, King Dubbist, One-Drop Music, Marée Bass and much more material is in the pipeline… ===== [lyrics] ===== Kali Green - Serpent Behind A Curtain "inna mist of a foggy jungle babylon haffi be exposed kali garten a pon the microphone watch what dem do behind a curtain babylon a worship a serpent watch what dem do behind a curtain a wicked babylon dem a worship a serpent for a long time ya mi saw dem greedy for the power and the fame dem sell their soul to their demon so more blood a shed cause dem heart turn evil cold blooded figure with a mind fi kill yu politicians dem blind the youth and conquer keep dem mind busy with a daily soapyopra hypnotize yur son hypnotize yur daughter so stand up Jah people we gotta get smarter pull out a sistrens and bredrins out the gutter look politicians dem a talk dem a blabla watch what dem do behind a curtain babylon a worship a serpent watch what dem do behind a curtain a wicked babylon dem a worship a serpent fire burn babylon don't try fi miseducate the youths dem a try fi fool yu try fi seperate yu miseducate yu but rasta a go school yu babylon dem tricky and dem want fi rule yu cast a spell upon yu and mind control yu watch what dem do behind a curtain babylon a worship a serpent watch what dem do behind a curtain a wicked babylon dem a worship a serpent ya man, dem should a know dem should a know, ras we a burn vampire dem should a know this is a real ting we burn vampire and we burn gun slaughter dem sit down pon destruction we burn dem hotta money inna pocket and dem think dem top shotta we nice up the dance and play the rub a dub a dem try fi brainwash we dem think we done sloppy too many youths a rise and dem cyaan bury no evil nor deception can keep we weary Jah warrior inna militant suit or khaki teachings of the legends transmitted to the rookie and we stand proud with the knowledge instilled in we like the sensimilla it enhances my ability open up mi mind make I realize this fuckery Jah Jah done blessed I n I with agility so mi dodge every blow babylon a throw at we poverty and hate including disya politricks cyaan give in now cyaan ever try fi call it quits dem a shapeshifting reptiles demons from the depths of an evil dimension and dis a warning for my people acting blind if yu don't seek yu don't find"