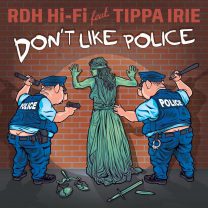 RDH Hi-Fi feat. Tippa Irie - Don't Like Police [LIONSCHOICE005] A1 // RDH Hi-Fi feat. Tippa Irie - Don't Like Police A2 // RDH Hi-Fi - Hardway Don’t Like Police Part III B1 // Tippa Irie - Don’t Like Police Part I [Natural High Dubs Remix] B2 // Dub The Police Part II [Natural High Dubs Remix] ----> (download full INFO SHEET) LION'S DEN /// www.lionsdensound.de /// produced by C. Mahe aka Clem RDH /// lyrics & voice by A. Henry aka Tippa Irie /// remixed by A. Chaplain aka Natural High Dubs /// artwork by ohoroho /// mastered by Star Delta Mastering /// All rights reserved. © + ℗ 2018 Lion's Den 12" / 33 1/3 RPM / 4 Track EP / 180g & DIGIKALLY (MP3 / WAV / etc.) Here comes another tuff collaboration with RDH Hi-Fi from Nantes, France, we and a few other sounds have been playing throughout the last two years on heavy rotation as exclusive dubplate - always causing nuff ‘furore’ in the dance. For the ones who have been patiently waiting and asking about it: it’s finally ready for the people… A riddim called 'Hardway' was given to the UK veteran Tippa Irie from London for some lyrical nice up. He approached it with a conscious message and with his original chatting style and wrote and voiced a powerful tune on the riddim - speaking out against all wickedness and injustice by the police - a topic truly important to us. So get ready to skank in unity, teach them about power to the people and 'put up yur hand, if yu don't like police…' The flipside holds another ruff digital remix inna hardcore fashion. Responsible is none other than the french ‘dub invader’ Natural High Dubs - well-known from his longtime involvement in the Lyon dub scene and projects like High Tone and their sound system force Dub Invaders. Musical ammunition against police oppression. Both sides were transferred to 1/2inch Tape for extra analogue warmth, mastered with care and pressed on high quality 180g vinyl by Star Delta / Delta Disc, UK - of course also digikally available. The artwork is again by none other than ohoroho from Slovenia. ===== [about the artists] ===== RDH Hi-Fi [Nantes / FR] http://www.rdh-hifi.fr/ The RDH Hi-Fi project was created by Clem and Simon, as they both wanted to get involved into the sound system movement, and participate in the promotion of reggae music as well as its positivity and message of unity. Both instrument players at a young age, RDH Sound is also producing and playing home-made original dub productions and exclusive dubplates. Inspired by legendary sounds and producers such as King Earthquake, Zion Gate Hi-Fi or Gussie P (to mention only a few), as well as other classical Jamaican artists such as Burning Spear or Culture, their selection flows through different kinds of styles of music that are part of the history of reggae and dub music up to the latest stepper/electro dub productions freshly out of their own studio. To ensure the best knowledge and control of the equipment they’re using, they try to build all the machines and materials they need (speaker boxes, dub sirens, effects, preamps, etc.) themselves - as the pioneers of the sound used to do. They’re promoting the sound system movement, spreading a positive and conscious message through the physical and spiritual vibrations of the their sessions. Tippa Irie [London / UK] http://tippairie.com/ Anthony Henry aka Tippa Irie was born to Jamaican parents in South London and gained first experience as a hard-hitting dancehall toaster on his father's sound system called Musical Messiah while still in high school. After graduating, he soon joined the microphone stand for Saxon International, Britain's best sound system at the time - further developing his fast talking style and touring all over. After a series of 12-inch singles on the famous Greensleeves label, he released his first album "Is It Really Happening to Me?", with the success of the single "Hello Darling" fully launching his career. A collaboration with Mad Professor, who produced one of his next albums, "Rebel on the Roots Corner", for Ras Records further established him as a recording artist and since then it has been a big number of studio-albums and singles with many great names from all parts of the planet: The Bug, Far East Band, Horseman, The Skints, Black Eyed Peas, Congo Natty, Aswad, Jurassic 5, Pow Pow, Digitaldubs, Mungo's Hi-Fi, Curtis Lynch, Fogata, Part2Style, and many many more. But Tippa Irie is not just a successful entertainer touring the whole world and entering the studios near and far. He has also built up a reputation as a top record producer and owns his own studio and record label called Lockdown Productions - in operation since 2007. Natural High Dubs [Lyon / FR] https://soundcloud.com/naturalhighdubs “Member of High Tone & Dub Invaders. I produce my own dubwise projects using the name NATURAL HIGH DUBs. I perform live sets on an analog desk. Inna wild style!”