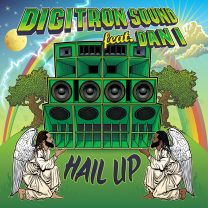 Digitron Sound feat. Dan I - Hail Up [LIONSDR001] A // Digitron Sound feat. Dan I - Hail Up B // Digitron Sound - Hail Dub ----> (download full INFO SHEET) DIGITRON RECORDS & LION'S DEN /// www.digitronsoundsystem.net /// www.lionsdensound.de /// produced by T. Vrkljan aka VRX/Digitron /// lyrics & voice by Dan I of Imperial Sound /// artwork by ohoroho /// mastered by Star Delta Mastering /// All rights reserved. © + ℗ 2016 Digitron Records & Lion's Den 7" / 45RPM / tune+dub version & DIGIKALLY (MP3 / WAV / etc.) Here comes another brand new Lion’s Den release. This time in the 7” format in collaboration with our good friends from Digitron Records from Zagreb, Croatia. A tuff steppas tune with ‘Balkan Dub Defender’ Vrx on production and well known Italian dub activist Dan I on vocal duties. Well versatile, approaching the riddim with a unique ruff voice. The outcome is a powerful chant to Jah, a praise song called “Hail Up”. Firmly Rastafari inspired lyrics wholly merge with a pumping riddim, ready to shake any Sound System near and far. Digitron Sound prove again: they do not know any boundaries of craziness on using elements and sounds of the (dirty) electronic vault. On the flip-side a ‘part 2 style’ dub version awaits the needle. Stepping into bass meditation terrain. Of course a whole heap of work has again gone into an adequate presentation with an absolutely stunning comic style sleeve and label artwork - this time by the great graphic artist ohoroho from Slovenia - and as always the material was transferred to 1/2inch Tape for extra analogue warmth, mastered with care and pressed on high quality vinyl by Star Delta / Delta Disc, UK. It is also digitally available. ===== [about the label] ===== LION'S DEN - fire sound all around LABEL // SOUNDSYSTEM // STUDIO // PROMOTION Lion’s Den is a label / a sound system / a studio / a platform / a collective / a production and promotion force / a “political solidarity support” focused all around music currently situated in Berlin, Germany. The idea of the Lion’s Den was set into place by Ras Lion (GER) a few years ago and has since been developing all along the way - all about connecting different people, different influences and inspiration and merging creative energies. The record label Lion’s Den has the aim to promote proper Dub, Steppaz, Reggae, and other music in the same terrain on vinyl and digitally, including videos, art installations, merchandise, etc.  Lion’s Den is working with various vocalists, musicians and producers from all over the world to deliver finest conscious music and spread positive vibez – always on a musical mission… Forms of expression include sound system dances, live and dj sets as well as studio recordings and jam sessions. ===== [about the artists] ===== Digitron Sound [Zagreb / HR] http://digitronsoundsystem.net Digitron Sound System, pioneer dub sound outta Croatia, balkan dub defenders! Since 2007 based on members of 2 live dub bands (Radikal Dub Kolektiv and Bamwise), piled up and led with the intention of making the first Croatian sound system, in a country where there was no culture of its kind. Musicwise closest to UK sound of digital dub with influences of different musical directions, from electronic music, to more organic. Usual suspects in Croatian and European underground scene: festivals, clubs, autonomous zones etc... Digitron runs many nights in the biggest Croatian and only alternative cultural centre, former squat called Medika. A monthly program is paired with organizing and running many dub stages on different festivals (Modem, Lost Theory, Seasplash etc…). Apart from being active as an act that has been performing all across Europe on some of the leading festivals and club nights (Fusion, Reggaebus, Hadra, Lusine etc…), Digitron also has a label called Digitron Records and is an active production force - always ruff and tuff. Dan I [Feltre / IT] http://www.imperialsoundarmy.com/ Born in the north of Italy at the foot of the alps in 1981, singer and producer of Imperial Sound Army (founded in 2000) and Imperial Roots Records (founded in 2005). His first release "Jah Command" was released on the Italian label Moa Anbessa in 2005, since then he has worked together with the most prolific sound systems, labels and producers from all over Europe... Today Dan records for some of the early UK dub producers such as Jah Free, Alpha and Omega, Jonah Dan and he works live on the mic alongside a good number of big sounds & selectors in the scene… His conscious lyrics can be found on various 7", 10", and 12" vinyl releases. Since the end of 2013 he also plays on his own 30KW handmade sound system along with a various number of honorable guests - firing sessions absolutely not to be missed!! Imperial Sound members: Dawit, Violinbwoy, Jonah Dan, Sammy Dreadlocks, bro Gabriel, Fikir Amlak, Dan I.