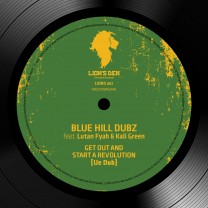 Blue Hill Dubz feat. Lutan Fyah & Kali Green - Get Out And Start A Revolution [Ue Dub] -FREE DOWNLOAD- Nah compromise, strictly dubwise... Blue Hill went back on the tracks of his first release on Lion's Den [LIONS002] and merged the existing energies with new fire to recreate and reinvent a new very unique musical piece on a meditational but still revolutionary vibe - from the perspective of his alter ego Blue Hill Dubz. Beautiful piano melodies interplay with the voices of Lutan Fyah and Kali Green, a "choir" of sufferation chanting on heavy dubby riddims and a floating melodica, long echos and piercing skanks prepare a journey for mind and soul... "As times seem to get rougher and tougher in political terms in the urban jungles of the world, conscious music and cultural activism in general gain in importance. Message music to uplift the people is essential in society…" The track was transferred to 1/2inch Tape for extra analogue warmth and mastered with care by Star Delta, UK. grab your FREE DOWNLOAD thru soundcloud... LION'S DEN /// www.lionsdensound.de /// contact [at] lionsdensound.de /// produced & mixed by G. Kostara aka Blue Hill Dubz /// vocals recorded by Partillo Productions @ Drum&Blaze Studios Göteborg & J. John aka Ras Lion @ Lion's Den Studio /// lyrics & voice by A. Martin aka Lutan Fyah & T. Mokheseng aka Kali Green /// artwork by Martin Engelbogen aka Darkwing Dub /// mastered by Star Delta Mastering /// All rights reserved. © + ℗ 2014 Lion's Den ===== [about the artists] ===== Blue Hill Dubz [Athens / GR] soundcloud.com/blue-hill-dub/ soundcloud.com/dark-echoes Blue Hill's biography reads like a diverse journey through a musical jungle. Birth in Sweden and spending the first 13 years in a place called Blue Hill - one of the places where witches were said to gather - is followed by the Greek capital Athens. The classical guitar was picked up at the tender age of 10, leading into uplifting trance production with 13 and moving into psychedelic trance with 15. Then followed by a typical youths metal band. Growing older he eventually opened up his musical listening and as he has always been a reggae lover got more and more fascinated by dub and surrounding styles such as steppaz, rootstep, dubstep, jungle. It did not take long and he produced his first own bass oriented music with a heavy reggae vibe. With early support by another musical activist and producer from Athens, called FLeCK, Blue Hill soon released on Breathe Records and ODG as well as Monkey Dub Recordings. His productions have since gained more and more attention world wide - with more to come - so watch out... "Blue Hill Dubz" is Blue Hill's project with more deep sounds like Psy Dub, Dub Tech, Dubstep... Lutan Fyah [Spanish Town / JA] lutanfyah.wordpress.com/ A conscious reggae singer with messages of unity, love, and justice deeply embedded in his music, Lutan Fyah was born in the parish of St. Catherine, Jamaica, with music in his blood. With his grandfather running a sound system, artists such as Lieutenant Stitchie, Papa San, Lady G., and the legendary Dennis Brown would often visit the family home. Fyah aspired to become a famous singer himself, but he also took his soccer playing seriously and joined a professional team after finishing high school. He gave up sports in 1999 and began an internship at Buju Banton's Gargamel label. He went on to record some tracks for Banton's label along with some freelance work for other producers, before singer Jah Mason came along in 2001 and offered Fyah the support slot on his worldwide tour. Three years later he made his full-length debut with "Dem No Know Demself" on the Minor7Flat5 label. "Time and Place" on the Lustre Kings label followed in 2005. A year later he released two albums, "Phantom War" on Greensleeves and "Healthy Lifestyle" on VP… the list goes on and on and by now Lutan Fyah has released a huge number of singles and albums with producers from all over the world touching on a variety of genres connected to the reggae influence and there is hardly a place where he hasn't performed yet - probably one of the most hard working artists out there. Kali Green [Maseru/Berlin / LS/GER] lionsdensound.de/?page_id=32 watch out fi di wicked lion Kali Green on di microphone - Lion's Den family… nuff a dem stylez! di voice comin’ in hot, comin’ in sweet! haffi check it out, indeed…! right now hitting di stage all over and recording some wicked material inna di Lion’s Den… the first releases are already out and more to come...