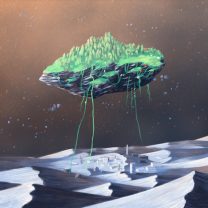 Aries & Ras Lion - Reality (feat. Navigator & Mish Maybe) [HIGHER001] Higher Ground Recordings /// produced by E. Priest aka Aries & J. John aka Ras Lion /// lyrics & vocals by R. Crawford aka Navigator /// recorded @ Lion's Den Studio /// backing vocals by Mish Maybe /// recorded @ Chopstick HQ now available for streaming and pre-order via Bandcamp... for more info visit https://highergroundrecordings.com/ and better come to the release party this summer 09.-10.06.2017 // A Bass Odyssey @ Mensch Meier / Berlin This special collaboration goes back to September 2014, when Aries was passing thru Berlin for a little gig. As on a number of his previous stops in the city, he again came to visit the Lion's Den headquarter for a short night - to share some vibes and music, eat some food, have a reasoning, etc. As he liked the new studio set up - the new location being a result of a moving earlier the same year - and the nice atmosphere he had always experienced in Berlin, he asked if he could come back early next year to spend a few days in the studio together, build some tunes, maybe meet with some other music people around and just see what will come out. It was not long after - mid-january 2015 to be precise - that Aries took a plane from Switzerland, where he had played the night before, to Berlin and came down to the Lion's Den to meet again with Ras Lion. A first night of listening, exchange and a lot of talking were followed by one intensive day and night fully on a musical mission: building an original riddim somewhere between jungle and dub - with a strong rootikal influence. On the second afternoon they got a call from Navigator, who knew Aries was in town for some works, and asked what was going down in the studio. Shortly after he came over and a little reasoning was followed by the question, if we got something to work on together, as he was eager to jump on the mic. The newly built riddim blasting from the speakers made him catch a vibe and he liked what had been created. A full song was written and recorded in no time as the energy was on high levels. The outcome is a junglist anthem - worldwide universal! Strictly conscious lyrics, reality lyrics, fresh with nuff styles… After this great musical meeting, it was then all about finalizing the riddim with the brand new vocal as much as possible before Aries had to leave back to London the next day. Many hours of mixing sealed this first mostly sleepless creational phase with an already decent and powerful first version. Little more than a week later Navigator came down for another recording session, as he wasn't fully satisfied with his performance and had reworked a few passages flow-wise, since the tune was still very fresh and written kind of 'on-the-fly' in the studio in the first session. This time he nailed the final takes as envisaged. The whole project was then transferred to Aries' studio in the Chopstick Headquarters in London as he had the idea to record the singer Mish Maybe on backing vocals to even strengthen parts of the tune. Now after quite some time finally ready - the final mix out of his studio for all skanking junglists - on wax via Higher Ground Recordings - the brand new Berlin label by activist Jimi Handtrix - of course with a wicked roller on side B, courtesy of Brian Brainstorm… who feels it knows it…